The best Vanilla Buttercream you will ever make! Four simple ingredients are all you need to make this classic American buttercream recipe. I made my own birthday cake. I think this is pretty standard for bakers, and I’m totally ok with it. I was actually not going to make a cake at all, since I was knee-deep in Pastry School at the time, but my husband insisted that we needed one, even if that meant buying one from the grocery store.

This is harder and harder for me to do these days. Buying a grocery store birthday cake used to be a thing (I know they are gross to some, but I love the sickly sweetness – I’m sorry!). These days I know I can (and have) made better, so I can’t bring myself to buy them. 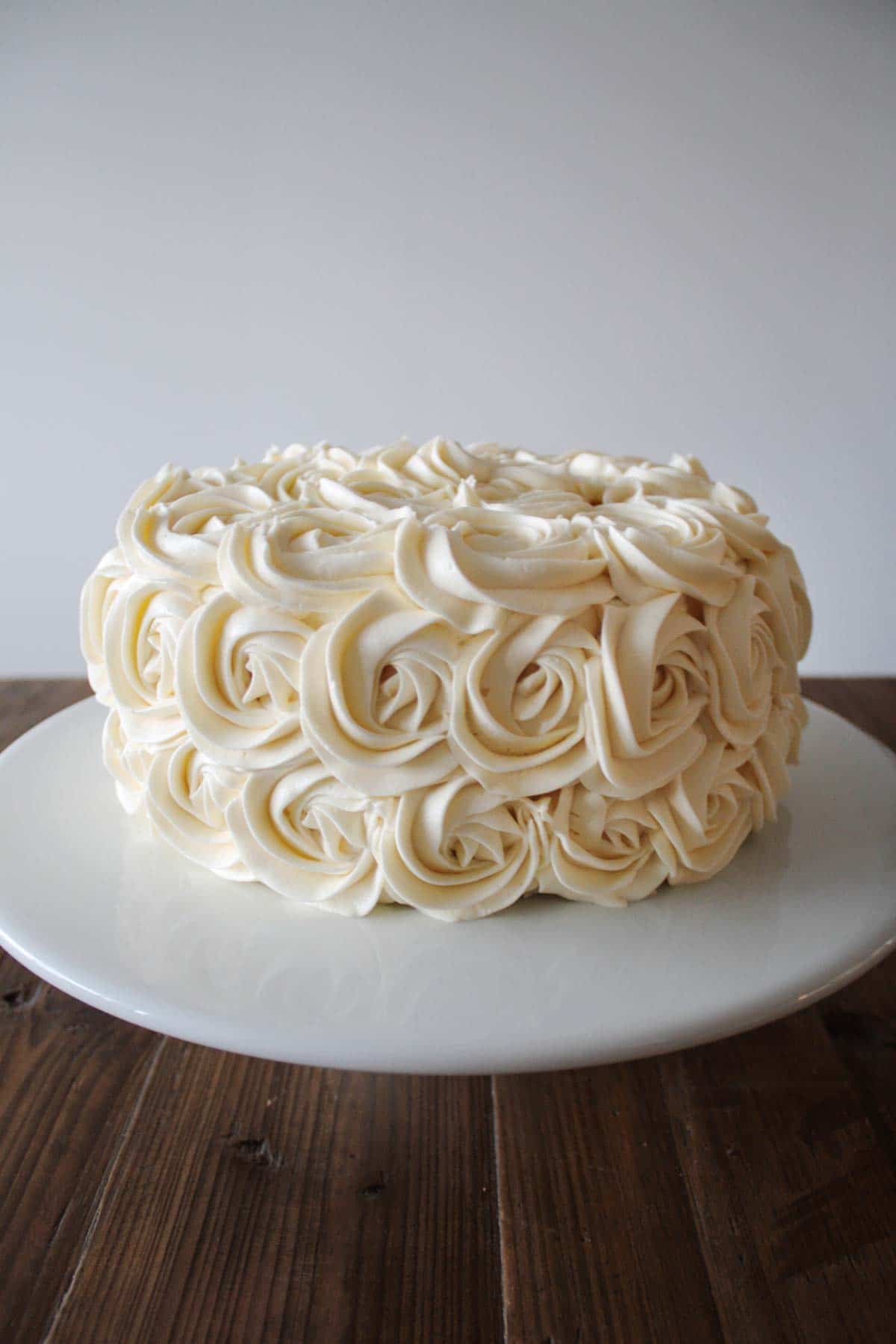 It helped that I still had a couple cake layers in the freezer from when I baked them for my Flat Top Cakes post.

The recipe I used was my Almost Scratch Cake. So with the cake layers already done, all I had to do was defrost them, make the frosting, and decorate. I decided to go for an American Buttercream for ease. 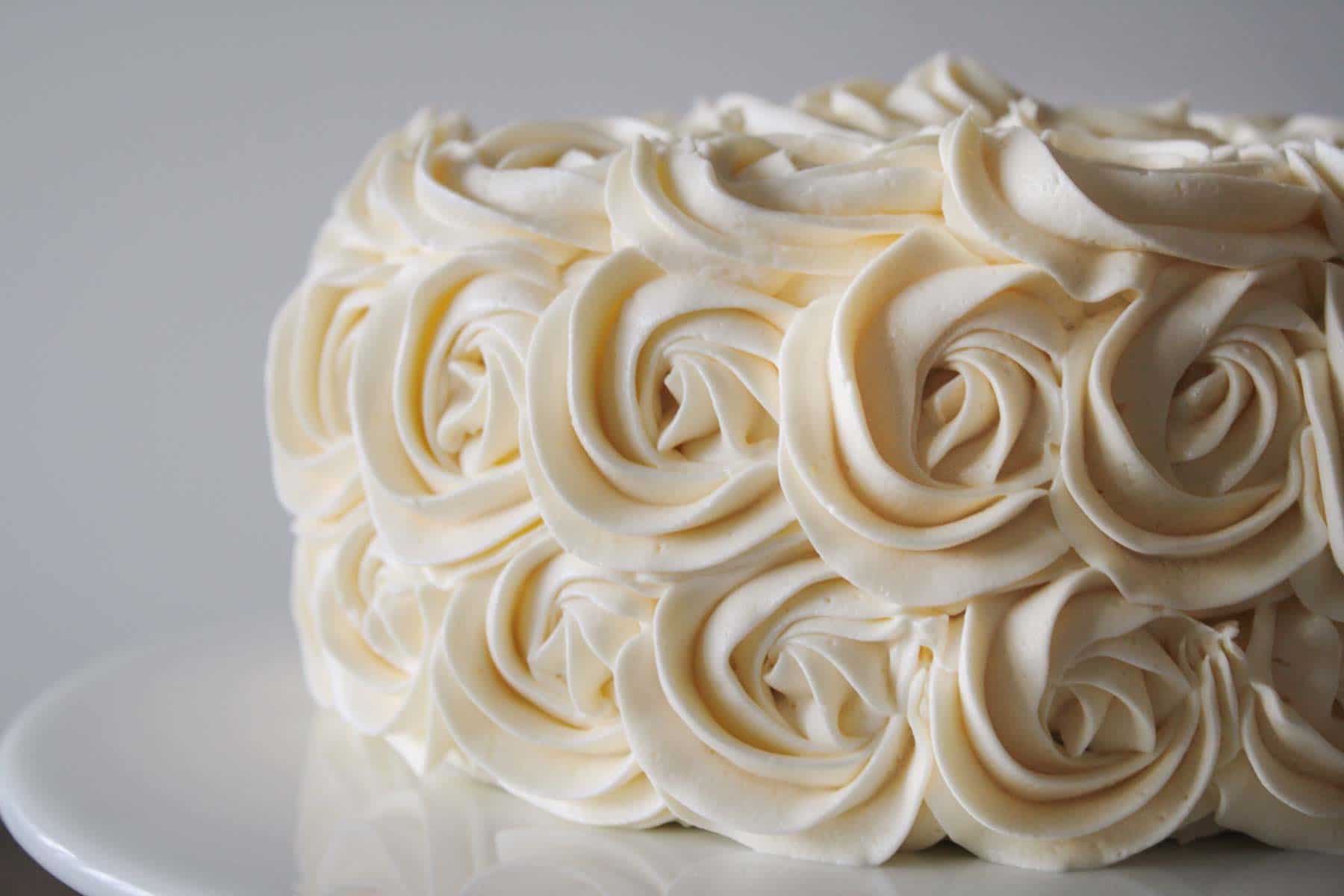 What is American Buttercream Frosting?

I’ve actually had a hard time nailing down a good, simple vanilla buttercream recipe – what some would call American Buttercream – that uses mainly butter and powdered sugar.

I usually make Swiss meringue buttercream, which I love but takes a bit more effort, and I was most certainly looking for something with very little effort.

The BEST vanilla frosting I’d ever had was on my wedding cake, a cake we commissioned from Gannon’s, the restaurant we had our reception at. We didn’t do any tastings or see any samples, we just sent them a picture of what we wanted it to look like and chose our flavors. 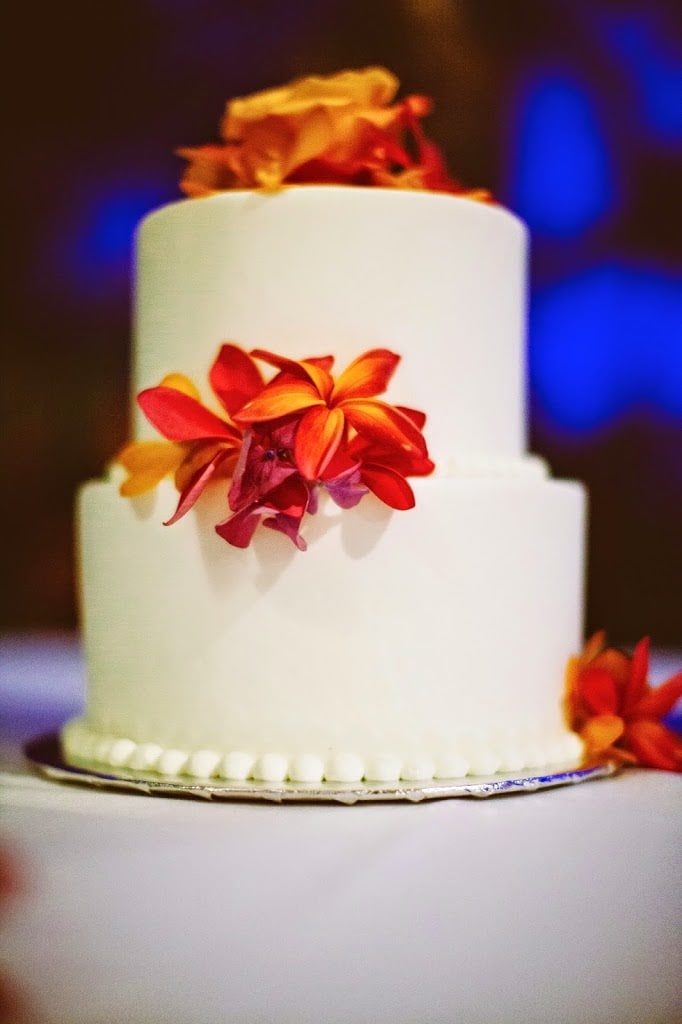 This cake was unbelievable, the buttercream so smooth and delicious. We had a ton of leftovers, which we happily took back to our condo and devoured over the next few days.

I’d mentioned multiple times to Ryan that I wondered how they made it. I assumed it was a meringue-based one because it was so silky smooth, but it was less buttery than ones I’d made before. Powdered sugar-based buttercreams always feel so gritty… so it couldn’t be that.

Unbeknownst to me, Ryan had emailed Gannon’s and asked them for the recipe. He should probably get some kind of award, right?! I would never do this. I honestly did not think they would divulge their secrets, but they sent over a recipe!

How to make American Buttercream

This American buttercream consists of four simple ingredients — butter, powdered sugar, vanilla, and cream. I’m convinced that there are a few key things you can do to make sure your buttercream is nice and smooth with as little grit as possible.

Now, I’m not convinced this is the exact same vanilla buttercream that was on our cake (it still felt a little gritty when I made it, not as gritty others before), but it was delicious. I am super happy with the end result and will definitely be making this buttercream again! 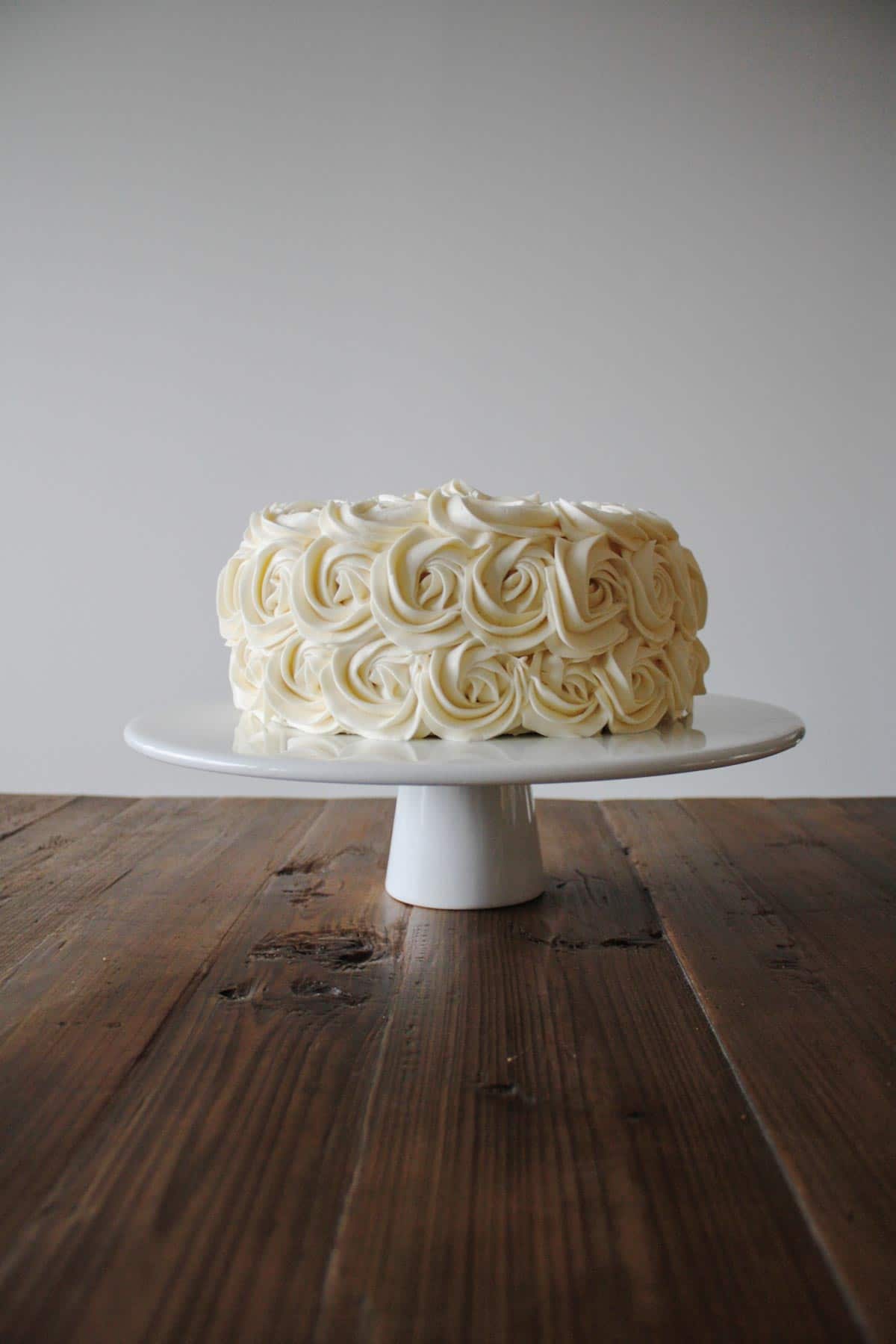 How to make a rosette cake

For the decorating, I wanted to try something new (to me) and a rosette cake. I’ve seen this done before and it looked amazing, so I wanted to give it a try.

I had done rosettes before, but usually just as decoration on top of the cakes or on cupcakes, not something that would cover the whole cake. I could have winged it, but I’m glad I checked out a couple of video tutorials first. I wouldn’t have thought to offset each row of roses to fill in the gaps.

I stacked and iced the cakes and did a crumb coat layer on the outside – thicker than just a crumb coat, but not too thick, as the rosettes would add a lot of icing already.

For this rosette cake, I started at the bottom and worked my way around, then the next layer, then the top. 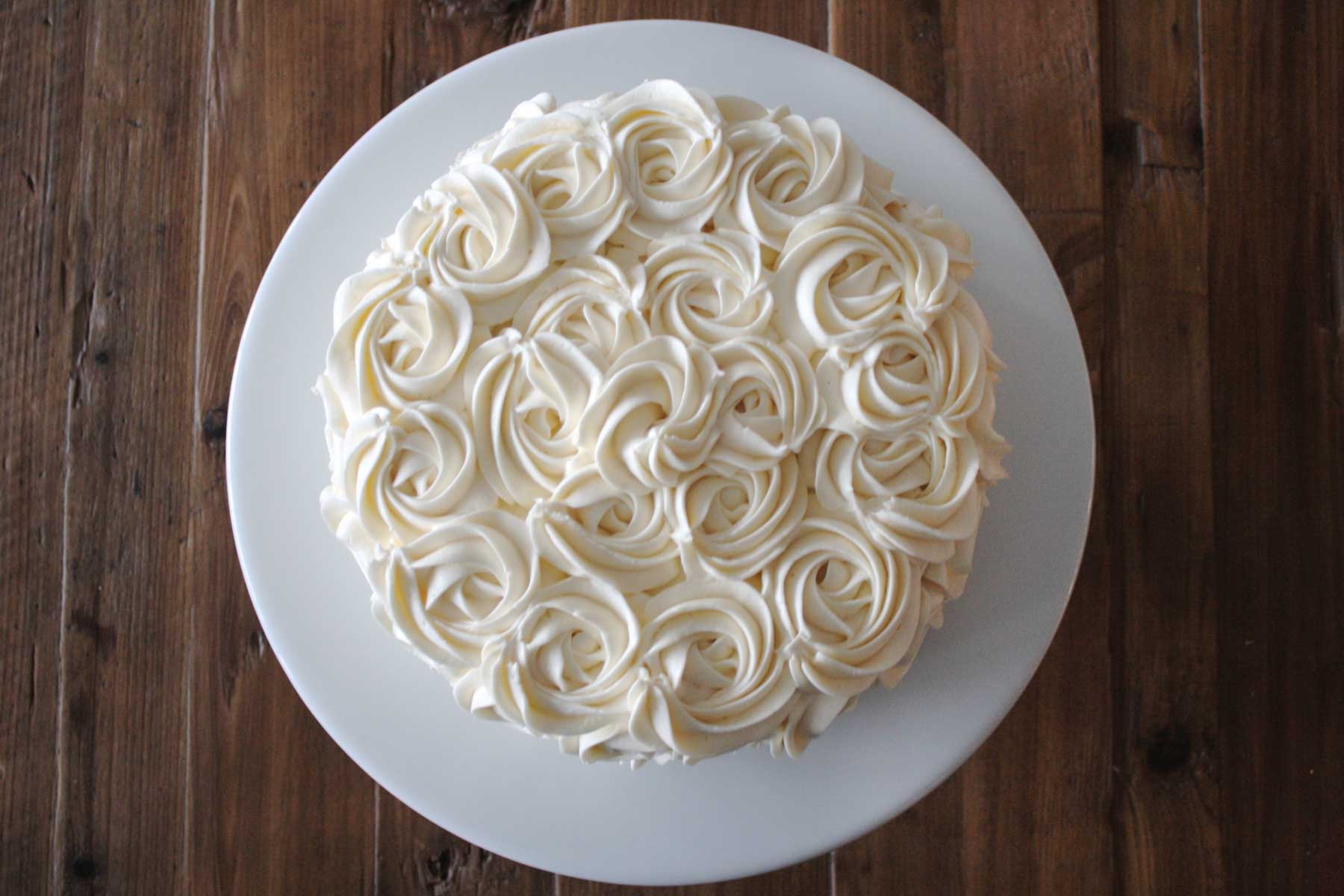 All in all, the rosette part was really easy and probably took less than 10mins. I’m surprised at how easy it was, really. It’s a simple way to decorate your cakes and make them look stunning!

This particular vanilla buttercream is a bit less sweet than most you’ll find. I don’t like mine super-sweet, so I just added less powdered sugar. You can adjust this to your liking though — just use more/less if you prefer, but be sure to adjust the cream as needed!

If you’re looking for an easy and delicious vanilla buttercream recipe, this one is for you!

Tips for this Vanilla buttercream recipe: 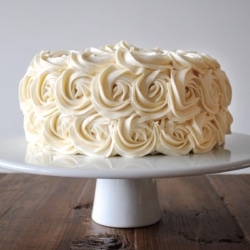 The best Vanilla Buttercream you will ever make! Four simple ingredients are all you need to make this classic American buttercream recipe.

The nutritional information and metric conversions are calculated automatically. I cannot guarantee the accuracy of this data. If this important to you, please verify with your favourite nutrition calculator and/or metric conversion tool.