Ultimate S’mores are puff pastries filled with milk chocolate and marshmallow fluff, baked in the oven, and topped with a dusting of graham cracker crumbs, cinnamon, sugar, and chocolate. If you love the taste of s’mores, be sure to check out my Frozen S’mores and S’mores Puppy Chow!

There is no need to build a campfire to enjoy all the flavors of s’mores when it comes to these Ultimate S’mores. You still get the melted chocolate, marshmallow, and a little bit of graham cracker that you would only expect to get while sitting by a fire. But, you can bake this sweet treat in the oven to enjoy with a glass of milk in the comfort of your own home! 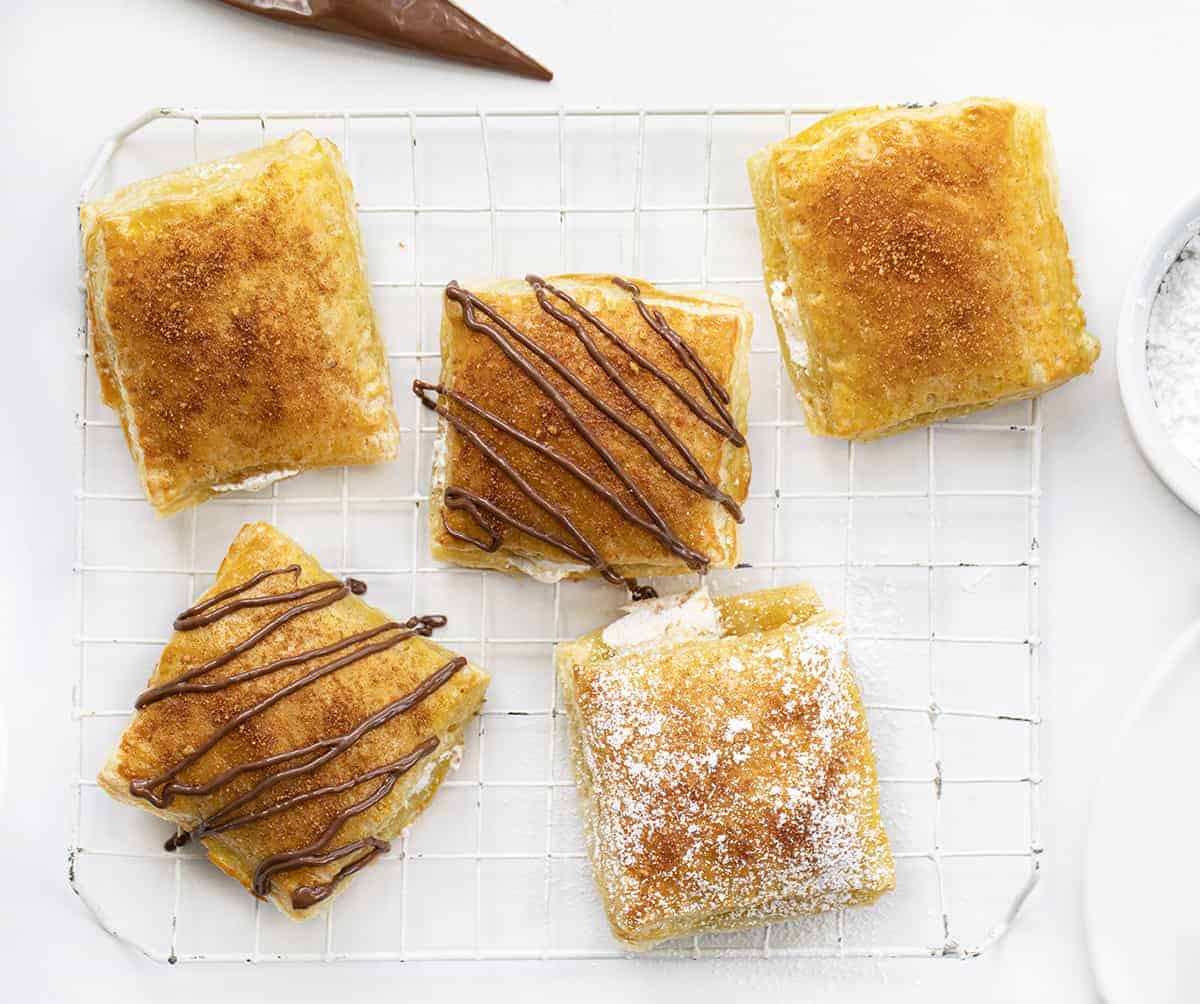 Puff Pastry: I used two sheets of frozen puff pastry, thawed and cut into 18 squares for this recipe.

Chocolate: I used milk chocolate candy bars to add to the Ultimate S’mores. It was easy to divide them equally between the pastries, as well as melt the remaining chocolate for drizzling on top of the baked s’mores. You could also use chocolate chips or any flavored baking chips you prefer.

Butter: Melt the butter to use after the s’mores have been baked. This helps the graham cracker mixture topping stick to the pastries. 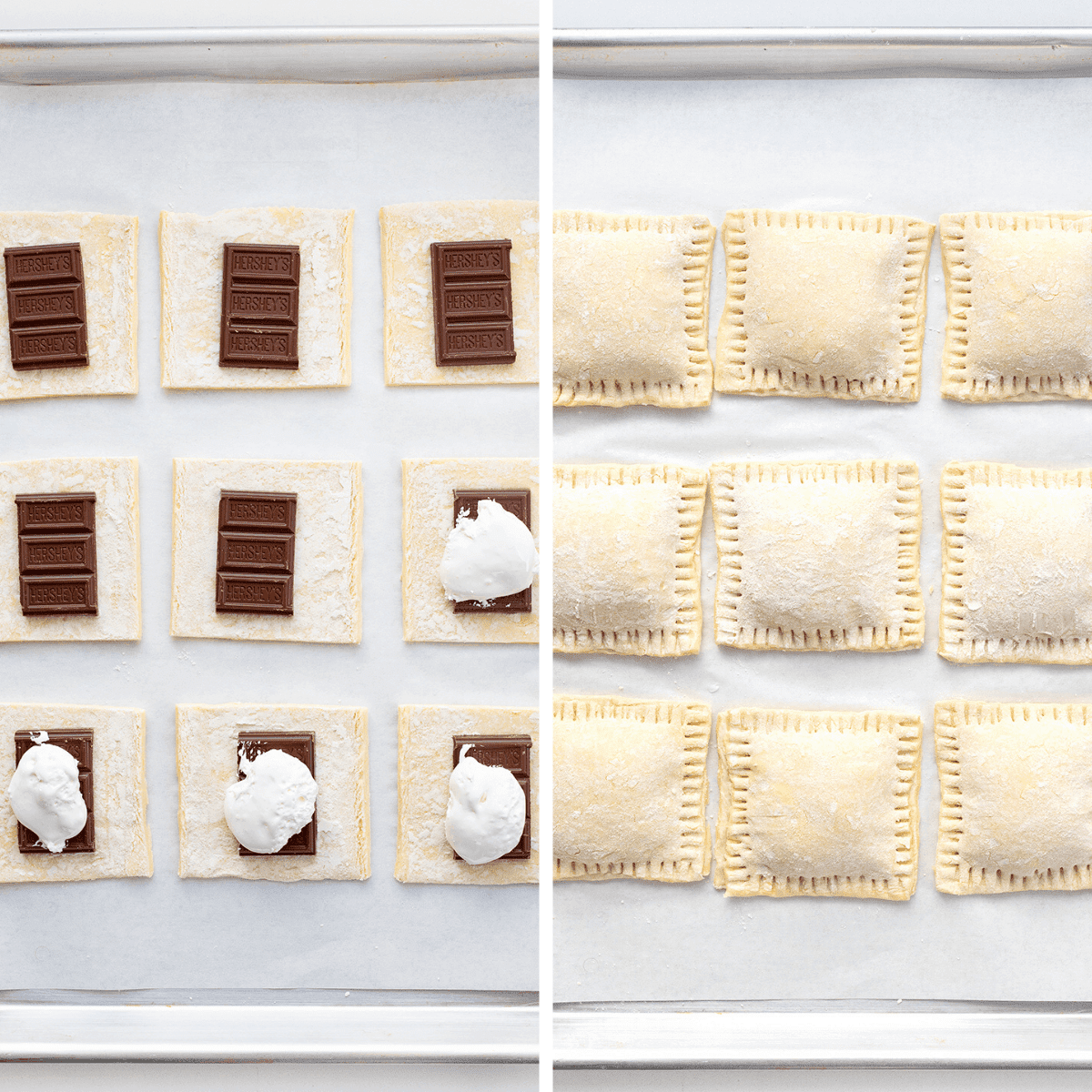 How to Make Ultimate S’mores

To get started making this Ultimate S’mores campfire treat (without the campfire), line a baking sheet with parchment paper. Next, lay the puff pastries flat and cut each sheet into nine squares. You will have a total of 18 squares. Place nine of the pastry squares on the lined baking sheet.

Top each of the nine pastry squares with an equal amount of chocolate. I used three candy bars that were broken into 12 sections each (a total of 36 pieces). Place three pieces on each of the nine pastries (27 pieces), reserving the remaining 9 pieces to be melted later for drizzling on top. But, you do whatever is easiest for you; just be sure to save a little bit of the chocolate for drizzling.

After adding chocolate, top with about 2 tablespoons of marshmallow fluff on each pastry. (Again, if using mini marshmallows, add 6-8 marshmallows on each pastry.) Then, using your finger or a pastry brush, wet the edges of the filled pastry with water. This will help seal all that ooey-gooey yumminess inside. Place the remaining pastry squares on top of each and use a fork to seal the edges. Bake the Ultimate S’mores for 15-18 minutes, or until golden brown. 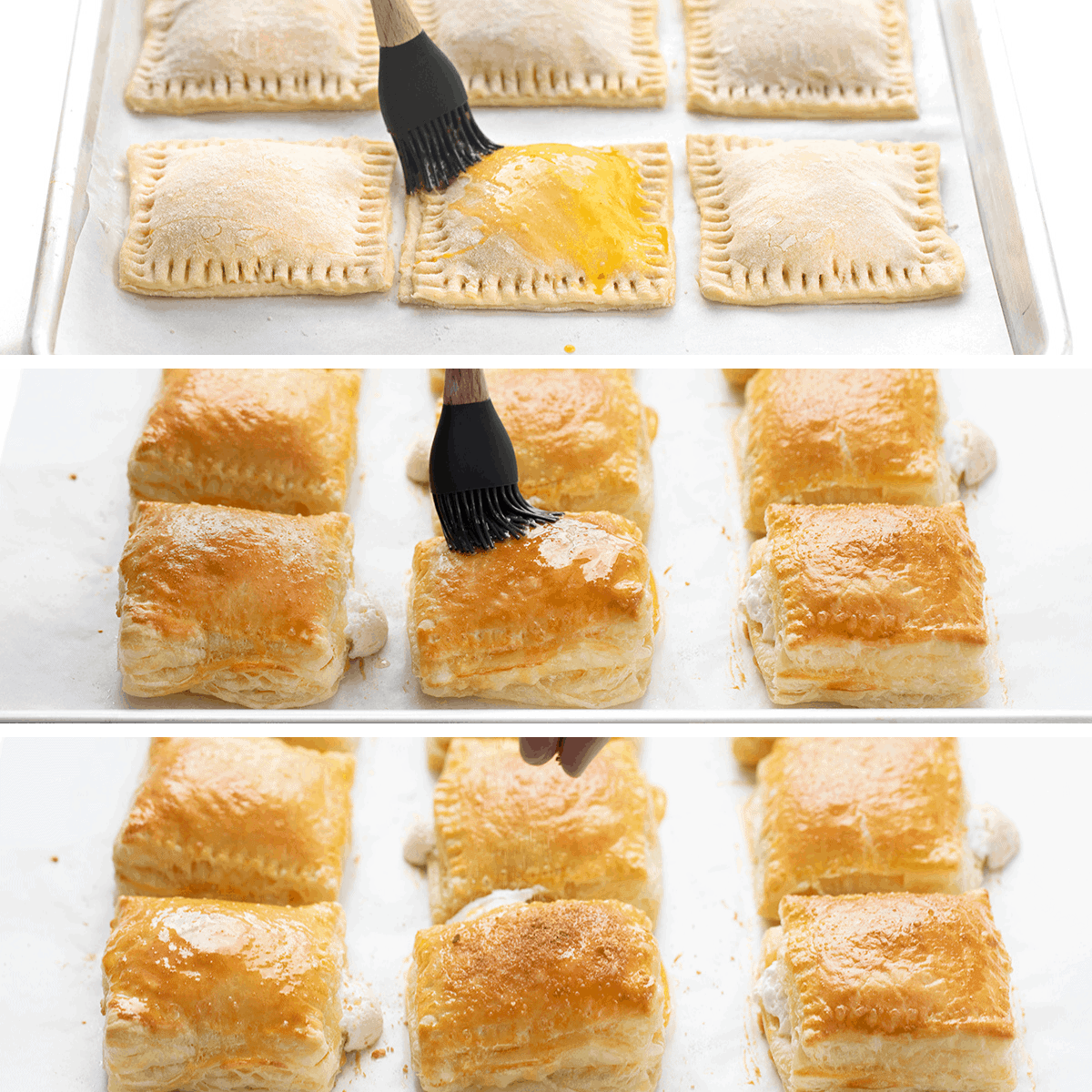 As the s’mores are baking, mix together the cinnamon, brown sugar, and graham cracker crumbs in a small bowl. Set that aside. Finally, after removing the s’mores from the oven, it’s time to sprinkle on the toppings.

When adding the toppings, work one pastry at a time. If you brush the melted butter on all of the pastries first, it will seep into the pastry and the graham cracker mixture won’t stick. Once the mixture has been sprinkled on top, melt the remaining chocolate and drizzle it over the tops of the ultimate s’mores. Serve warm with a tall glass of milk! 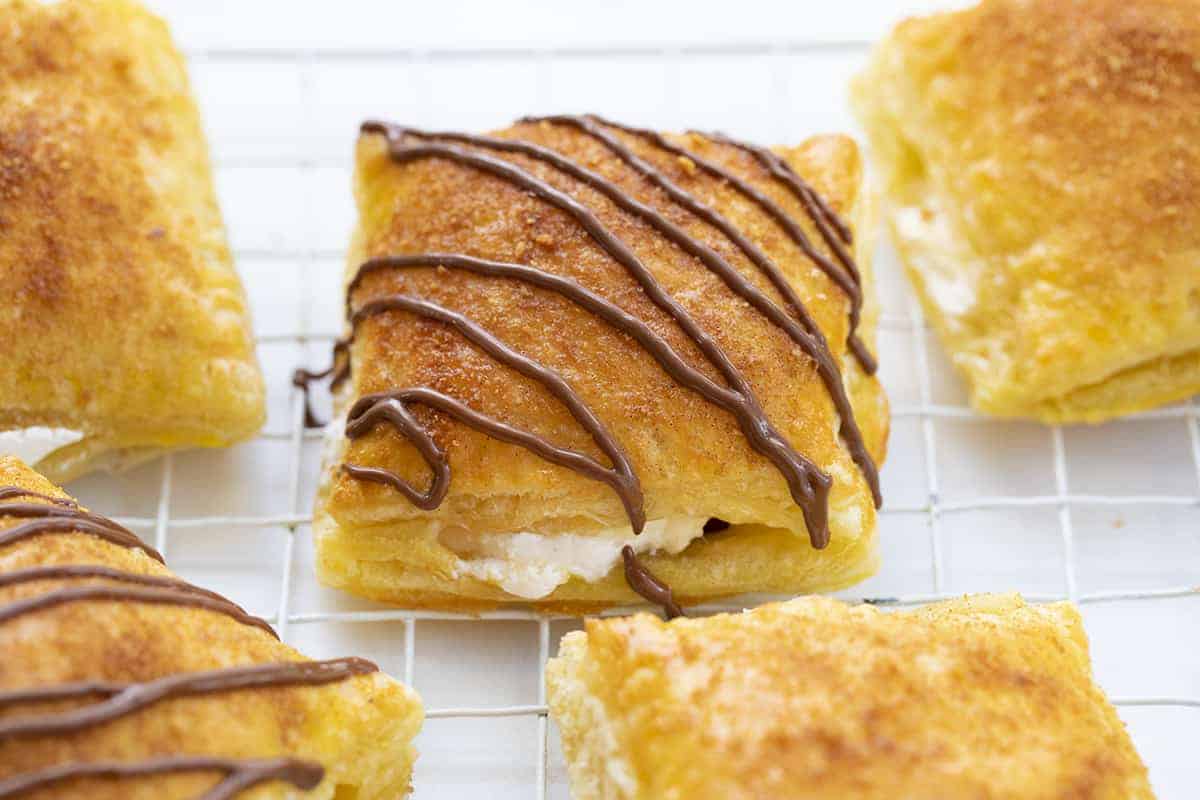 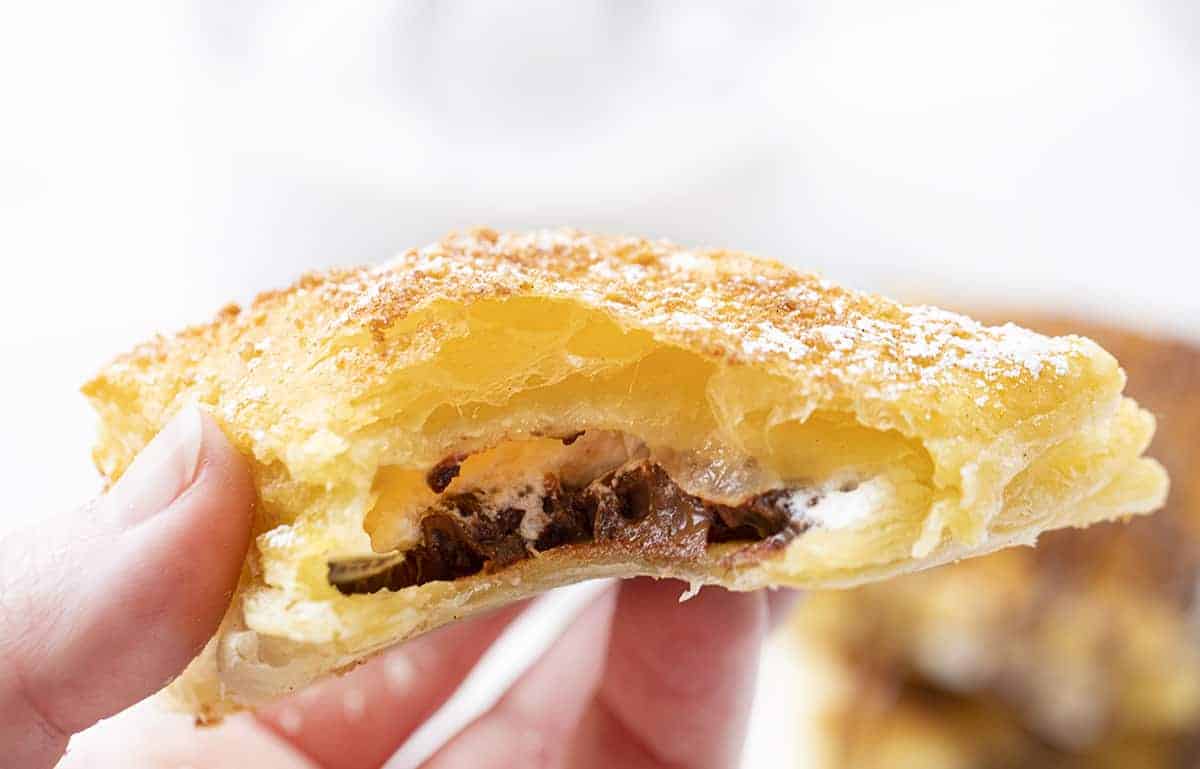 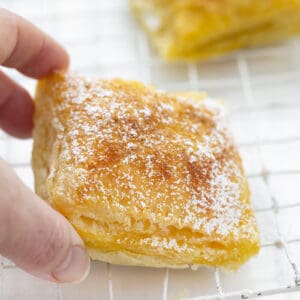 Ultimate S’mores are puff pastries filled with milk chocolate and marshmallow fluff, baked in the oven, and topped with a dusting of graham cracker crumbs, cinnamon, sugar, and chocolate.

Amanda Rettke is the creator of I Am Baker, and the bestselling author of Surprise Inside Cakes: Amazing Cakes for Every Occasion – With a Little Something Extra Inside.Over the course of her 15+ year blogging adventure, she has been featured in and collaborated with the Food Network, New York Times, LA Times, Country Living Magazine, People Magazine, Epicurious, Brides, Romantic Homes, life:beautiful, Publishers Weekly, The Daily Mail, Star Tribune, The Globe and Mail, DailyCandy, YumSugar, The Knot, The Kitchn, and Parade, to name a few.